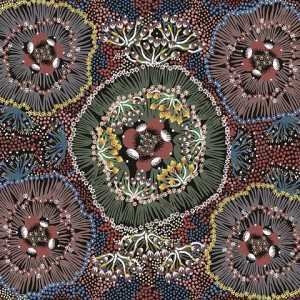 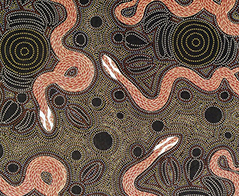 This week Marlene Doolan is in the spotlight. From a wwell-known artistic family, Marlene was raised in Santa Teresa in the Northern Territory. Like so many of the Aboriginal artists, she draws on Dreamtime stories shared by older family members. One defining item in her designs is the brilliant use of color. Her designs are sure to become a favorite.

“Bush Tucker After Rain” is one of the tuckers (food) as depicted within the bush tucker stories. The Northern Territory is an arid and semi-arid zone in Australia. Total rainfall for this area is low and irregular. However, when it rains for a short period, within a few days it will burst into colorful flowers almost everywhere. Duriing this period, plenty of bush tucker will be available. Some of the tuckers are:  bush beans, bush potato, bush tomato, wild apricots, bush plum, to name a few. This fabric is available in three colorways. 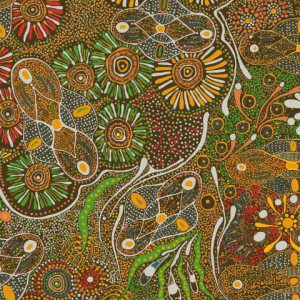 “Seven Sisters” – Australian Aboriginals tell several stories about seven sisters from the Dreaming Time, which is the time of creation of the universe by their ancestors. This story of seven sisters originated from the cluster of stars in the Taurus constellation.

“There were seven sisters who were all beautiful and elegant. Every man who saw them wished to marry one of the sisters. One day the sisters went into the bush with their digging sticks to gather foods including wood ants, witchetty grubs and honey ants. After a successful expedition, they sat down to enjoy a feast, never imagining that a lonely warrior name Warrumma was hiding close by watching them. While the sisters were eating, Warrumma took away two of the digging sticks and hid them. All the sisters looked for the two lost sticks in vain, but eventually the five sisters who still had their digging sticks sadly left without the two sisters whose sticks had been taken.

Clever Warrumma came out of hiding and firmly grabbed the two sisters by their waists. He promised to take good care of them and would marry them. The two girls decided that they would pretend to agree with Warrumma’s plan, while looking out for the opportunity to escape.

One day they were asked to cut pine bark for a fire. As soon as they climbed the pine trees the trees began to grow right up to the sky. Warrumma shouted in vain for them to come down. However, they continued climbing and were soon warmly welcomed to the sky by the five sisters anxiously waiting for them. Observe the constellation of Taurus carefully and you may see the two freed sisters as they arrive at their sisters’ camp in the sky.”

In her design, Marlene depicts luminous heavenly bodies suspended in the desert night sky. The Milky Way is represented as clouds of dots of different sizes and major stars are shown as a large dot surrounded by circles. Seven Sisters is available in 2 colorways. 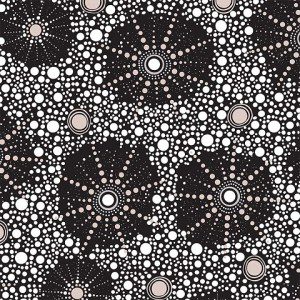 Samantha Jones is this week’s featured artist.  She is a self-taught painter of natural habitats. Born in 1974, Samantha belongs to the Yorta Yorta language group. Her great-grandfather, Thomas S. James, was a well-known preacher, famous naturopath and taught at Cummaragunja Mission in Victoria, Australia.

“Kangaroo 2” – Kangaroos are unique to Australia and are the largest marsupial surviving on earth. They are often found in both arid areas of open plains as well in dense forestland.  Kangaroos have a pouch to carry their young. Well-known for their movement, they hop on their hind legs while using their large muscular tail for balance. They also use their tail like an extra leg when maneuvering. Kangaroos and emus cannot walk backwards. For this reason, they both appear on the Australian Coat of Arms. 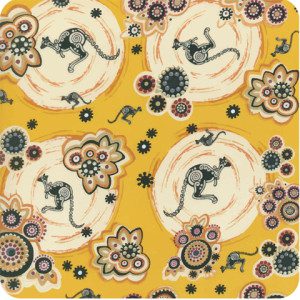 “Kookaburra” – Australian kookaburras are Australia’s largest bird within the king fisher family. They are mainly found in Eastern Australia, measuring 40-45 cm in height, of white or cream color on their bodies and heads and a dark brown stripe through each edge. The wings are black and brown with blue spots. They have a large head, small neck and a medium length tail.

“Laughing Kookaburra” comes from their most famous feature, the loud boisterous “laugh” often hard at dawn in the bush. In Australia, kookaburras are popularly known as  the “laughing jackass”. Breeding time is August to January. The females lay one to five eggs normally. Most of the birds live in family units and live in one place their whole life.

In Tasmania, kookaburras live in forests, woodlands and on the plains. One of the most loved birds in Australia, there are numerous rhymes and lyrics devoted to them. 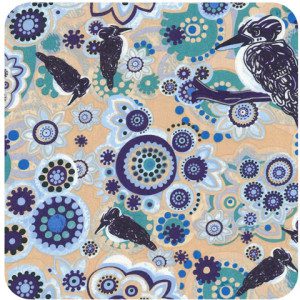 Anna Pitjara is our featured artist today. Coming from a well-known artist family, she was born in 1965 at Utopia Station northeast of Alice Springs in the Northern Territory of Australia. Her late mother, Gloria Ngale, started as a pioneer artist in the batik industry. Anna worked with her turning Aboriginal designs into silk batiks in Australia. Anna inherited some Dreamtime stories from her mother, father and grandfather. As a traditional Aboriginal designer, her artworks follow various body painting designs.

The Northern Territory is most known for its semi-desert or desert areas where water is a most valued commodity.  This is most likely the reason the Aboriginals live near creeks. Anna’s depiction of waterholes in dry creeks or in the forest beds is both vibrant and colorful. As a top artist, her art pieces are displayed in national and state art galleries.

In “Waterhole” it shows the Aboriginals vigilant to find new sources in the form of waterholes or soakage trenches. This design is almost an aerial view of salt lakes and the surrounding areas. 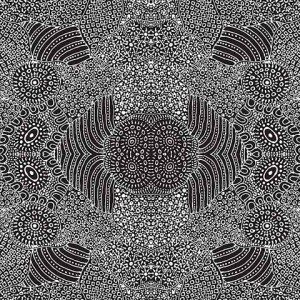 “Waterhole and Seeds” shows off the area in strong and neat designs from the semi-dessert surroundings. It is available in three colorways. 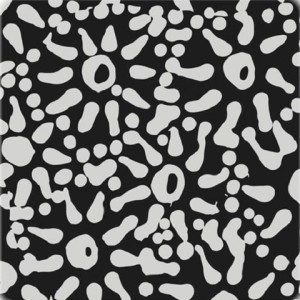 “Sulkage”  (soakage water) – As creeks dried up, they could still get water by digging down into the soft beds. They scooped out the first lot (not suitable for drinking). Then clean drinkable water flowed back into the hole. Aboriginals were always looking for waterholes wherever they went. This fabric is available in three colorways. 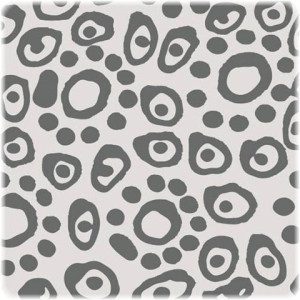 “Sandhill”  This is one of our most popular fabrics. Geograhically, a dune of sand is built by wind action that results in many different shapes and sizes. The importance of dunes has been recognized by the United States, Australia, Canada and New Zealand. These countries have developed significant programs for the dunes’ protection and stabilizing them. The dunes provide a highly specialized habitat for forms of flora and fauna. “Sandhill” comes in six colorways. 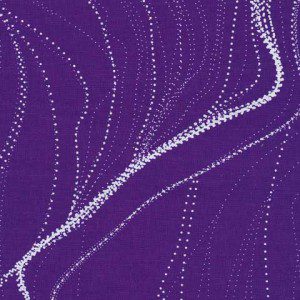 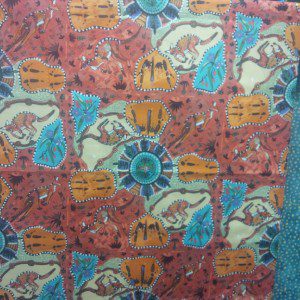 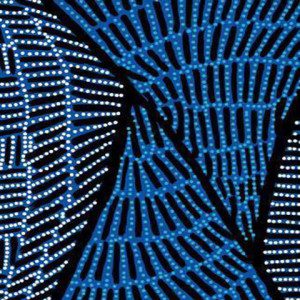 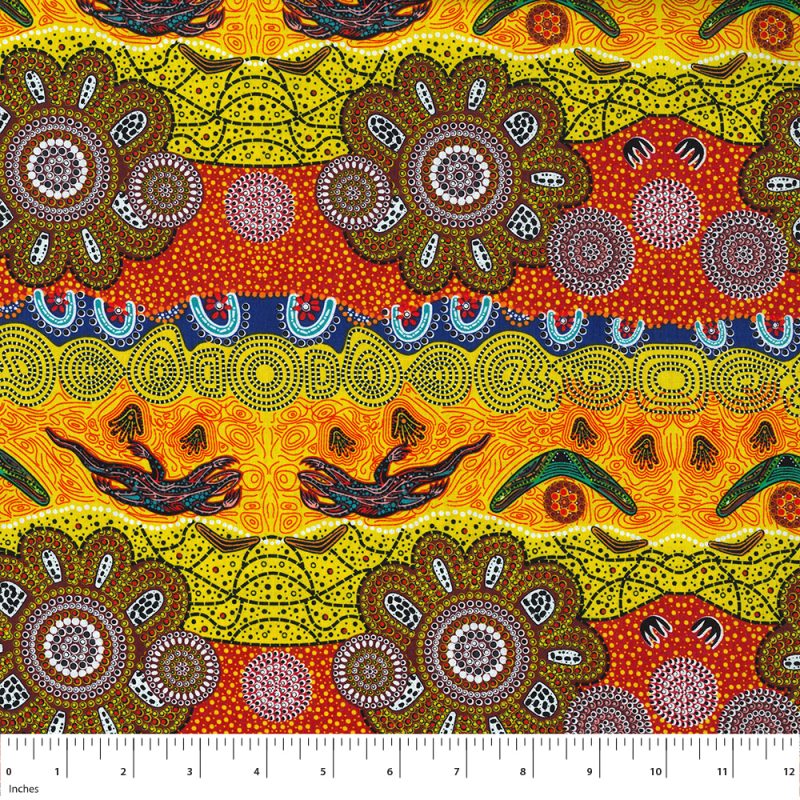 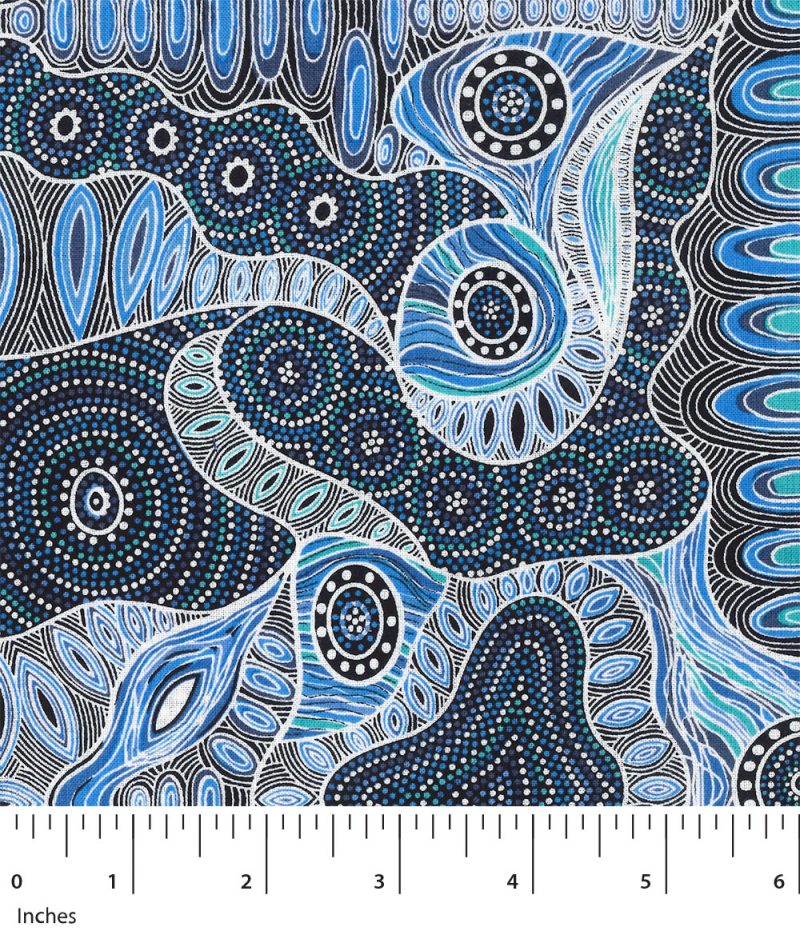