Donna McNamara (aka Donne McNamarra) is a skillful, as well as, ardent designer. Donna’s artwork is neat and vivid, brilliant and simply wonderful.

Donna’s design, Corroboree, shows people coming from all directions to attend a Corroboree, a ceremonial gathering of Aboriginal people. People are coming, bringing bush foods such as witchetty grubs, honey ants, and bush fruits which are all available in the area, and sitting around the round corroboree area. There are some strict unwritten regulations which attendees must follow. At corroboree Aboriginals interact with Dreamtime ancestors through dance, music, costumes and body decorations. Outside guests are not permitted to attend these ceremonies without the elders’ permission.

One type of corroboree does not cover all the social needs. There are corroborees for various purposes such as educational for children’s learning, death of a person, initiation and others. Dance is an integral part of Aboriginal culture and includes stories of the ancestral beings who are the creators of the universe. Dancing is learned at an early age.

Corroborees have religious connotations to relate individuals with the ancestral beings. Although the attendees and organizers are responsible people, they must get final clearance from the elders. No one is ever allowed to make unpleasant comments about the participants or performers.

Salt Plains are surrounded by extensive areas of sand dunes in a flat, arid landscape. Central Australia is a big and dry place with numerous large, dry salt lakes, especially in the Northern Territory. These creviced lakes are even more spectacular on the ground, typifying the beauty of the harsh lands of Australia, specifically at dawn and dusk. 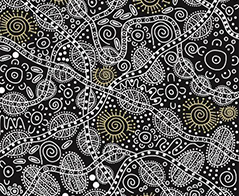 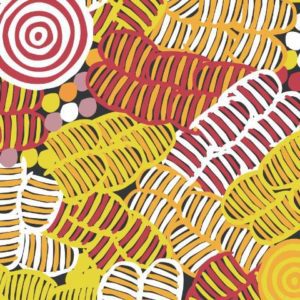 Our first artist this week is E. Young. As a well known artist from the Northern Territory, she uses bright and vibrant colors for her artworks. These works depict land, flora and fauna with a flavor of traditional Aboriginal culture. With this expertise, Young used her strong color sense in the Women’s Business artwork. In the natural environment women are sitting around the waterholes with coolamon (a basinlike dish made from wood or bark) and digging sticks. Wildflowers are visible with bright colors around the area.

In Aboriginal culture, certain spiritual customs and practices are performed separately in a language group between men and women. These separate businesses are often referred to as men’s business and women’s business. These businesses are carried out under strict guidance of unwritten Aboriginal laws. Women’s Business fabric is available in two colorways—Gold and Charcoal. Patch workers and quilters love this design. 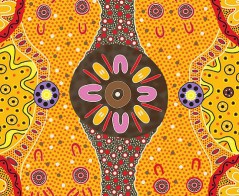 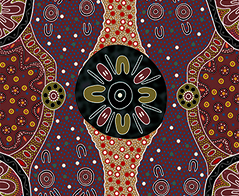 Our second artist is Natasha Stuart who designed Bush Tucker with Wild Fig. In Central Australia, wild fig grows naturally over a vast area. Fig is edible while raw and has a slight sweet taste. Dried figs are ground into a paste to eat.

Aboriginal people arrived on the Australian continent at least 50,000 years ago (by carbon dating). Over the period, they found ways of surviving that reveal an extensive detailed knowledge of the environment. Their understanding of native plants goes far beyond knowing what is edible. For survival and hunting they invented weapons and tools. Many of these things were unknown until recently. Even towards the end of the last century, it was hard to find a bush tucker (bush food) restaurant. Many books on the various bush tuckers are available. Natasha’s artwork provides some foods to use with wild fig for some fine dishes. It comes in three colorways, black, red and yellow. 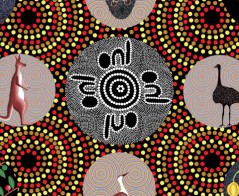 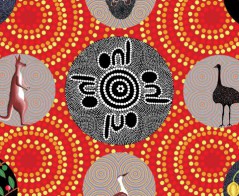 Check out our Gallery of New Arrivals! – Come see our newest line of unique fabrics. These marbled cotton fabrics from Quilting Treasures are wonderful! We bought 8 different colors so you would have a wide variety to choose from. And, rather than pay high prices for the hand-marbled fabrics that you see at the quilt shows, these fabrics are $12.95 per yard on good quality cotton. Check them out. 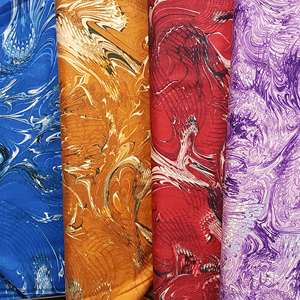